On the Marriage of Science & Imperialism

I recently had the pleasure of reading Yuval Harari’s “Sapiens: A Brief History of Humankind.” While I may not fully agree with his views on religion, his critical analysis on Homo Sapiens’ Scientific Revolution was really telling and descriptive. I really enjoyed his objective approach to describing how man’s ability to imagine entities (LLCs, credit) is what set them apart from other species. But what really got to me was his discussion on the military-industrial-scientific complex and how it fuels research.

Hariri suggests that modern (used loosely to describe the past few centuries) science differs from previous “traditions of knowledge” in that man begins by admitting ignorance. Our science is based on theories and empirical observations, yet we admit that these observations and hypothesis are subject to change or addenda provided new evidence is presented to suggest so.

Moreover, this knowledge is backed through mathematical proofs that provide models to our observed universe, as opposed to previous knowledge based on trial and error or physical manifestations. We then use this knowledge to establish tools that allow us to gain more knowledge and potentially enhance our quality of life. The latter being a subject of debate depending on the field you are studying and the research you are pursuing. The most obvious example is physics: Split the atom and you either annihilate a civilization, or control the atoms decay to produce a relatively clean and efficient source of energy.

One of the key events in the scientific revolution was during the 1760’s when the European scientific council mounted a scientific effort to measure the distance of the Sun from the Earth. This required taking multiple measurements of the planet Venus during its transition between the Sun and the Earth from various locations on our planet. The Royal Society of London for the Improvement of Natural Knowledge said that they need to send someone to the Pacific Ocean, in addition to astronomers being sent to Africa and the Americas. Obviously sending one astronomer for a single observation to the other side of the world is expensive, so the society deemed it fit to endeavor in a multi-disciplinary scientific expedition.

The expedition visited the Pacific Isles, Australia, and New Zealand, and brought back a wealth of data and observations (think of the ML models you could train!) along with the scientific hype of discovery that might be comparable to today’s hype in AI. The expedition even served as an experimental test for treating scurvy by dosing controlled groups of sailors with Vitamin C. All this thanks to the sponsorship of not The Royal Society of London, but The Royal Navy.

This was probably the first scientific endeavor that was backed with military funding. The expedition was lead by a naval officer with a scientific background of sorts: James Cook. Moreover, 85 naval soldiers were sent with the scientists and the ship was provided by The Royal Navy. The question is: Why would the military sponsor a science field trip to (technically) nowhere? The motives and behaviors of modern armies give us the obvious answer. But specifically, the geographical and meteorological data, among others, hold great political and military value, especially for an empire seeking to expand its reign, like Britain. In the next century, 90% of the population of the visited isles was gone and Britain expanded its dominance to the Pacific.

When the British Politicians and military acknowledged their ignorance of knowledge, like the scientists, and saw first hand the bounties of an expedition into the unknown, they capitalized on expanding their scientific understanding of the world. The government and military saw how spending on research could benefit their country and soon enough, businesses seeking a profit followed suit. Thus, the military-industrial complex was born. The army (or corporation) paid a scientist to do research, say on medicine or arms, and the results were turned into applied technology, a cure for scurvy sold on the market or enhanced artillery that decimates armies. Specifically for Europeans, the drive to expand and colonize was driven by their desire to discover the knowledge that could be found in these territories. 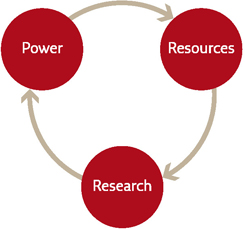 In Francis Bacon’s The New Instrument, he apparently argues that knowledge is power; that the real test of knowledge is whether it empowers us. Thus, if we take technological utility as the objective metric of utilizing knowledge, may argue that by extending the application of a certain scientific domain from domestic and civilian uses to military, political, and industrial gain is maximizing its utility. Such a viewpoint is flawed as it fails to consider subjective metrics that evaluate people’s feelings and wants. As an engineer, I love objective metrics since I can analyze it with math and statistics, making it easy to evaluate. Yet, when we discuss knowledge and technology that influences our mental (happiness, sadness) or social (friendships, family relations) state, then we (as researchers) have a moral obligation to consider the subjective metrics of such a tool. If the technology plays a role in life or death, then our obligation towards the analyzing its subjective utility becomes imperative.

As I write this, I am finishing my PhD and fellowship applications. After working with many PhD students during my undergraduate research, along with reading multiple articles and books about it 1, I came to realize how important funding is for PhD level research, especially if you want to do what interests you and not what project your advisor has funds for. So I applied for the NSF GRFP and the NDSEG - the latter being a fellowship that asks you to address how your research supports one of the DoD’s research thrusts but provides you with 3 years of funding at any institution. That makes a PI’s proposal senses tingle.

I went through the Broad Agency Announcements to see where my research aligns, and finished my application, even reaching out to directors. Only then did I realize that I just changed my research frame from supporting disaster and search & rescue operators to military - enabling efficient life saving robots vs. enabling soldiers to execute missions efficiently (potentially taking lives). I couldn’t help but think whether this undermines my authenticity 2. Certainly, researchers always change the “story” of their research based on the proposal their sending in. Yet, theres a certain tingle in the back of my head when I realize that I’m probably supporting the taking of a life in the future.

Is advancing my research and personal development at the cost of degrading the lives of other individuals and families worth it? Thankfully I’ve had Prof. Benjamin Kuipers article to read and consider. Apparently virtuous research can be done with military funding, but then theres the argument of being authentic to your morals and personal beliefs. I won’t dwell on this in the meantime, rather I’ll be seeking out more info about it from those with experience, like Prof. Kuipers, and hear their thoughts.